"Put a huge smile on my face for hours and a sense of wholeness
and purpose to my life situation."

"Channeling and using sound frequencies in a unique way that resonates on many levels of awareness."

"Andrew worked with a combination of sacred sound, light language, cord cutting and soul retrieval in a unique way."

Real, authentic healing, held in a compassionate space of open dialogue and sacred intention to restore balance and harmony within the individual.

Receive powerful energy work to help you embody all-that-you-are, offering a grounded and expansive experience, relating to you as you are in the present moment, and offering sessions that can be powerful or gentle.

Dive into deeper soul resonance, alignment, healing, clearing and assistance working with all aspects of self, such as ego, inner child, shadow, and past lives. Begin to integrate and master your own inner consciousness. Everything in the known universe is comprised of vibrating particles or waves including you. You are a pure energy being including your body, which is a vessel or vehicle filled with life force energy (spirit/god consciousness).

The vibrations you create for yourself or invite into your life will form your reality and impact all of your sensory experiences.

As a vibrating energy being, you carry many frequencies, colours and sounds, which manifest as your physical spiritual, astral, emotional and light bodies to name just five! All these bodies or dimensions of your being operate together to form your human life and all of your sensory experiences.

Sound Healing (also known as Sacred Sound and Vibrational Medicine) is all about vibration, resonance and intention. All sound is a vibrational frequency and all frequencies can effect each cell in your body including your DNA.

When you experience sound with therapeutic intention you not only hear it, you feel it multi-dimensionally; on a physical, emotional and spiritual level.

Sacred Sound creates specific tones and resonance that penetrate into the body to aid release of emotional wounds, energy blocks and trauma. Sound will also align or attune all levels of your Being, bringing them into vibrational harmony, giving you the space to connect and embody your true divine self. 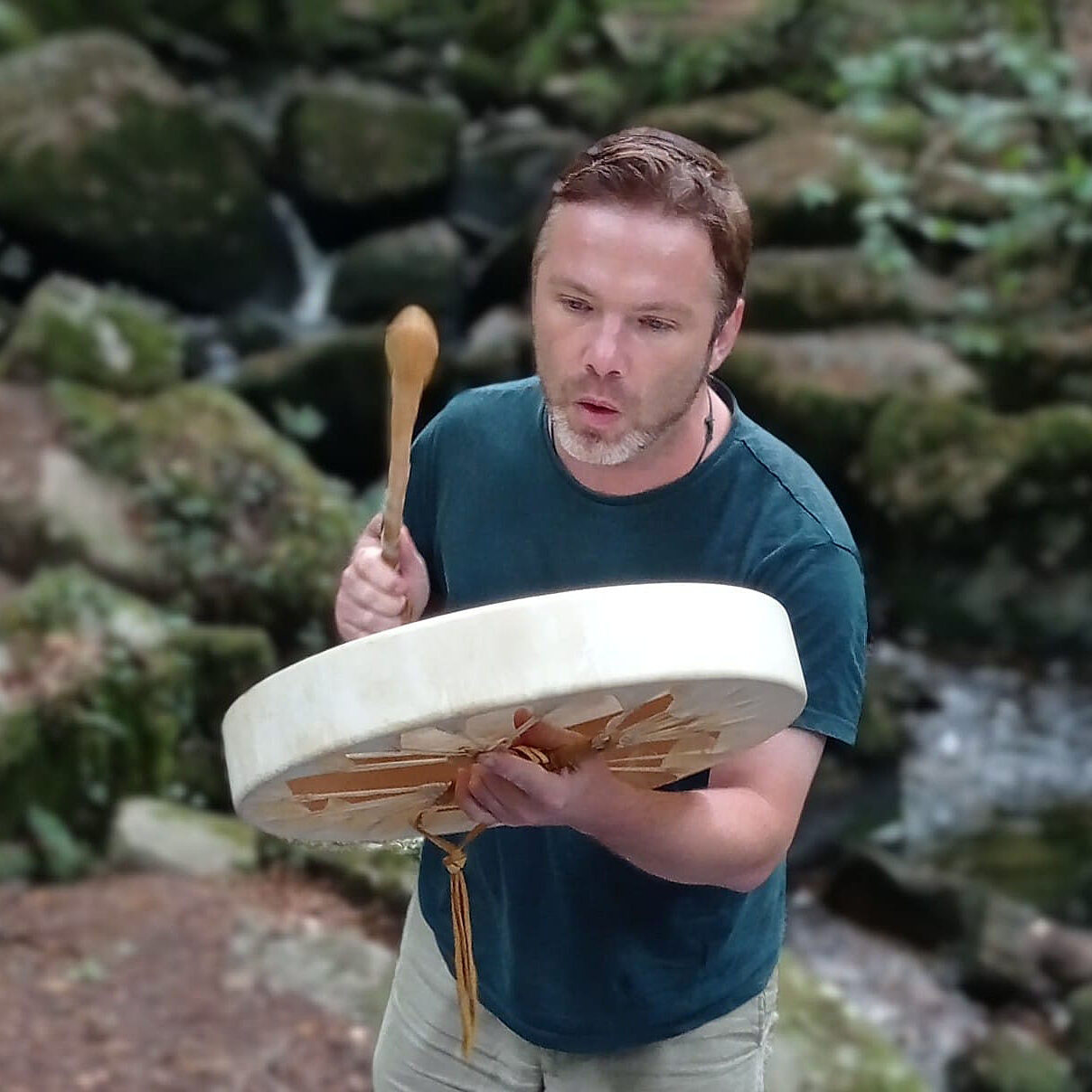 Andrew David Clare is a medium and authentic channel for spirit with 30 years involvement of spirit and mediumship, from a family of mediums. He has practised alternative health & healing modalities for over 18 years and has developed an expertise in facilitating unique healing sessions.

Andrew aims to embody and integrate higher-self connection to source and mother gaia, by acknowledging that we are multidimensional beings connected to multiple threads of consciousness.

Andrew is a certified Sound Healer, Reiki Practitioner and has two years of bodywork training, developing his own intuitive form of Meridian and Pressure Point Massage.

Don’t need a face-to-face appointment? Check out my Gigs on Fiverr
Concessions: Please gift an amount that is affordable to you. In your own time Vocal Transmissions with Andrew, utilising Vocal Sound Channeling, Light Language, Spirit Drum, Shruti and Tibetan Singing Bowls; to align or attune all levels of our Being, bringing them into vibrational harmony, allowing you space to connect and embody your true divine self.

The Channeled Sacred Sound will be a transmission of intuitive throat singing, overtones, polyphonic sounding, primal sounds and ancestral song to guide you through a very dynamic and active Journey within, to help you root into your body and to help dissolve issues and traumas past and present. Align, balance and activate the chakras and energy centres with Tibetan Singing Bowls positioned on the the body. These hand-made sound therapy tools send soothing vibrations deep into the tissue Restore balance on every level: physical, mental, emotional, and spiritual. Conscious shamanic connection and embodiment of Spirit to channel divine healing energy through voice, hands and instrument to bring about shifts and activations.

Powerful energy work to help you embody all-that-you-are, offering a grounded and expansive experience, relating to you as you are in the present moment, and offering sessions that can be powerful or gentle depending on your needs.

reconnect with self shamanic reiki

A Traditional Shaman works in a voluntary, ecstatic trance state, altering their consciousness to transverse the other dimensions of reality or to act as a receptive vehicle for spirit, with an ablity to tap into streams of consciousness, memories, information, inspiration, creativity and sound. They are said to walk between worlds, briding the gap between ordinary and non-ordinary reality.

Shamanic Healing serves to remove energies that are inappropriately present, or by returning energies that have been lost. This includes soul retrieval to assist embodiment of your whole-self by returning lost soul parts, or integrating aspect of yourself that may have left the physical body, or be hidden within the emotional body or the psyche. In this sense, shamanism is a relationship-based practice of making changes in non-ordinary reality to positively affect our every-day-lives. Integration of Energy can occur when an individual wishes to be supported by such work; where there is space held, with time and intention, for the integration and processing that an individual must do to complete the healing process.

Resolving all Relations – the practitioner directs and moves energy to restore harmony within the individual due to trauma, shock, illness and abuse. It also seeks to bring harmony between the individual and other people, places and objects, through resolving all relationship ties in the physical realm and the spiritual realms, both in this life and past lives, across all timelines. 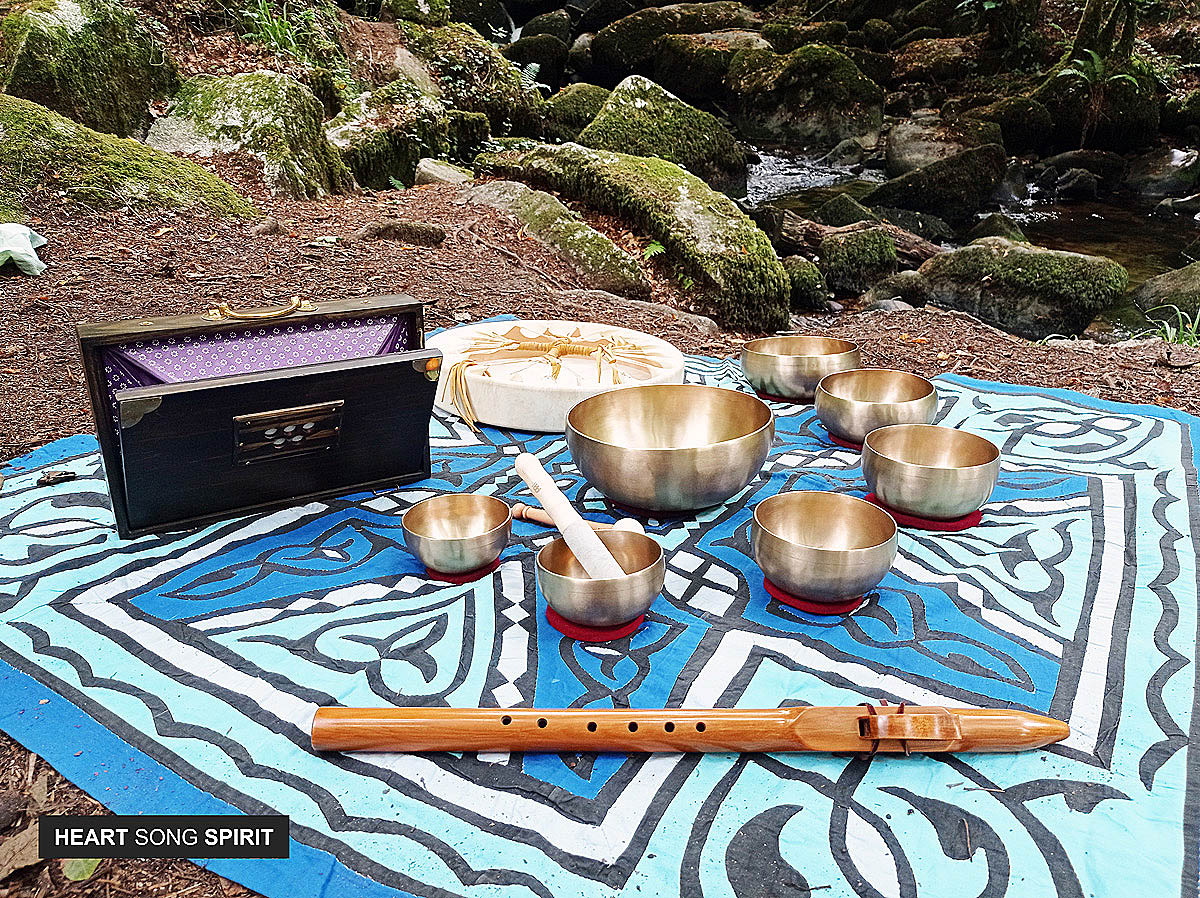 I hold space for Sacred Sound Journeys from 3 people upwards. A unique experience to be held collectively as we journey through a spirit led intuitive healing process using my drum, voice and other instruments.

Sacred Sound Journeys create deep resonant frequencies that harmonise with the collective energy field in an empathic, intuitive way that allows an attunement and energy shifting process to bring our energies into peace and harmony.

Reiki 靈氣 is a healing energy which can help you to make positive changes in your life. Reiki can also relieve stress, anxiety and ill health, and offer a better quality of life.

The secret art of inviting happiness The miraculous medicine of all diseases Just for today, do not anger Do not worry and be filled with gratitude Devote yourself to your work. Be kind to people. Every morning and evening, join your hands in prayer. Pray these words to your heart and chant these words with your mouth Usui Reiki Treatment for the improvement of body and mind – The founder, Usui Mikao ​​ I currently offer in person or distant Reiki healing treatments which you can receive at home, wherever you live. 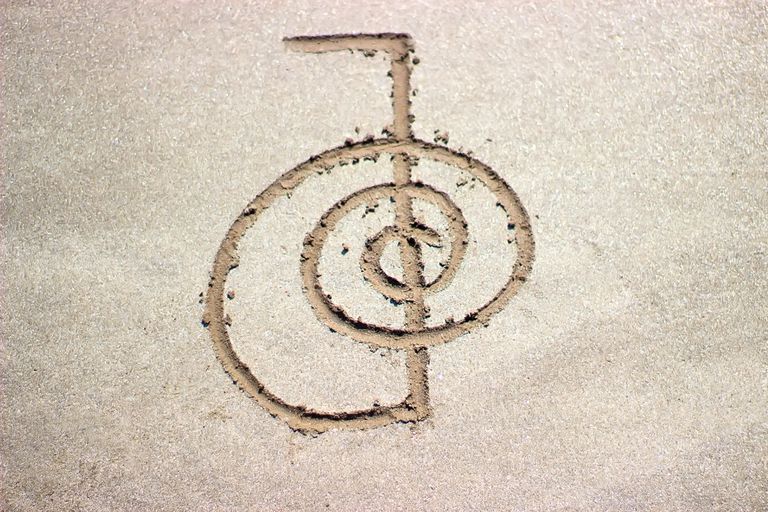 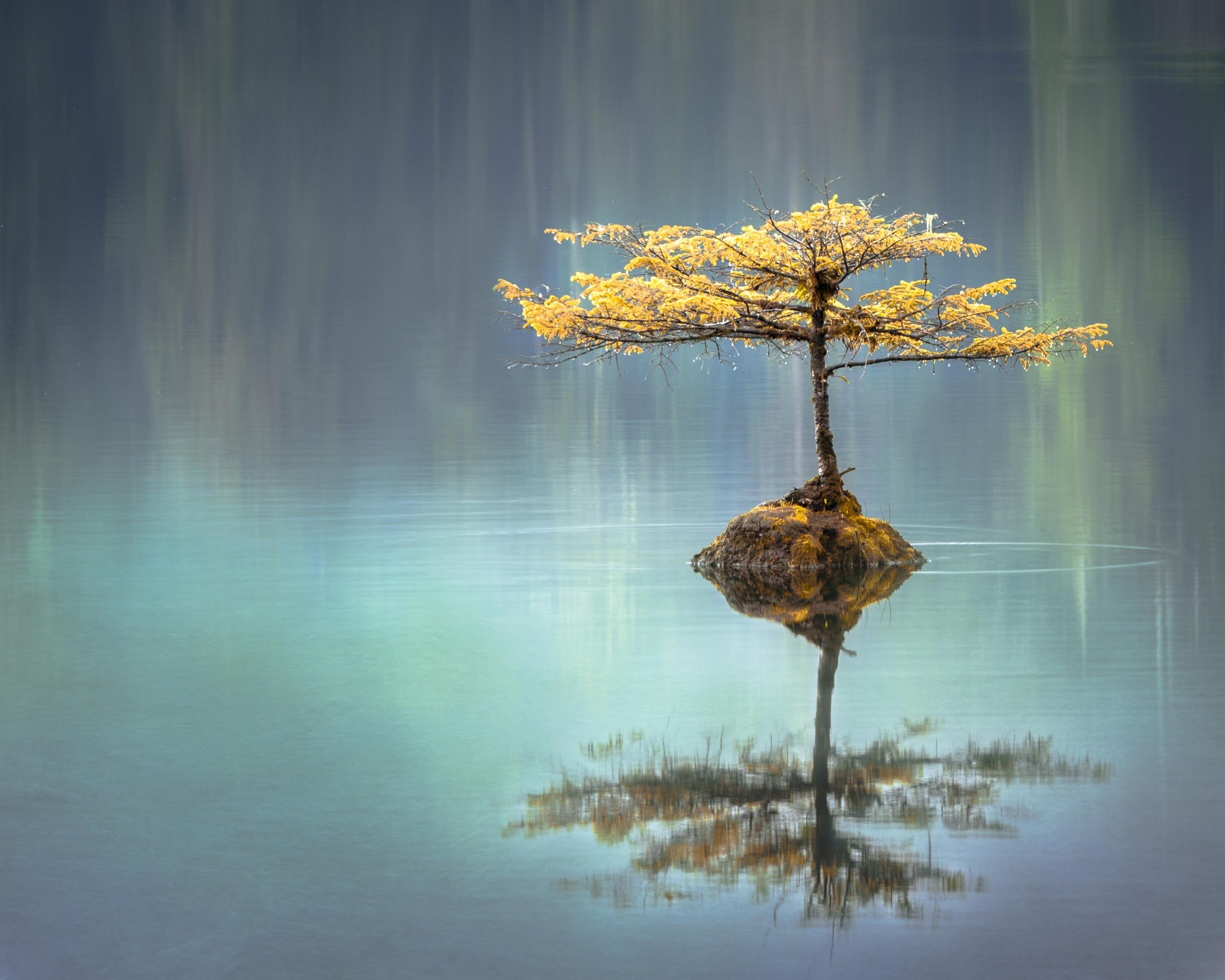 the connection between shamanism, reiki & buddhism

Mikao Usui was the founder of Reiki 靈氣, used as an alternative therapy for the treatment of physical, emotional, and mental diseases. It is believed that the aim of Usui’s teachings was to provide a method for students to achieve connection with the “universal life force” energy that would help them in their self-development.

According to many sources, Usui was also a Shintô priest. Shintô 神道 is a form of Japanese shamanism, which literally translates as ‘The Way of the gods‘ and revolves around the kami (‘gods’ or ‘spirits’) that are believed to inhabit all things. Usui is well know for the waterfall meditations on Kurama Mountain, which are a Shintô ritual. Strictly speaking, this is a combination of shamanism and Tantric Buddhism, which also includes shamanic practices. Since Usui was a monk of Tantric Buddhism in the Tendai school, he dealt with various healing arts, magical Taoism and the ‘way of the magicians‘ Shugendô. 修験道. Shugendô is a shamanic-magic ritual practice in the mountains and forests to gain supernatural abilities. For example, one practice  is to climb a mountain that has a rock wall on one side. At the top, a rope is tied to the feet of two persons. One then sits on the rock and meditates and the other meditates as well, but neither sitting nor standing, but hanging head first, hanging down the rock with his hands in the Gasshô Mudra (prayer pose).

Shamanism is also represented in the characters for Reiki, as they represent an ancient symbol of rain magic. Shown here is a shaman touch the earth and  performing rituals to make it rain. Here, rain is not always meant as just water, but rather a blessing coming down from heaven to earth.

What recepients have to say about their healing sessions

I can highly recommend Andrew’s healing. Andrew is a skilled healer and pure channel, he has a very grounded professional approach and is highly connected to Great Spirit and all that is.

Having been a medical secretary for many years and having tried a few other alternative therapies in the past with no success I was very sceptical, but was prepared to give anything a chance I felt so desperate for help. I was totally amazed at my first session at what I felt.

Andy is a very calm and compassionate person who immediately makes you feel at ease. I could feel the heat from his hands and feel it travelling around my body. Various part of me, mainly my knees had sensations…

Andrew is a truly gifted healer and channeler who has wonderfully positive and grounded energy. He is compassionate and truly cares about helping and healing others.

I always feel at ease around his energy, and he has understood my needs and assisted me in my healing journey by channeling and using sound frequencies in a unique way that resonates on many levels of awareness.

Highly intuitive advice. Beautiful and expressive transmission of healing and power. Put a huge smile on my face for hours and a sense of wholeness and purpose to my life situation:) Thanks!x

You are unique and so much of you is beyond the words. In colour and feel and a miriad of dimensions…

Please contact Heart Song Spirit, so that you can discuss your needs and decide which is the most suitable therapy for you. In-person bookings in the UK and international Zoom sessions available!

The quickest way to connect is via the social links below or you can use the dedicated booking form below. I usually reply within 24 hours.

If you have chosen a therapy please fill in the booking form to schedule a session. Depending on my schedule I will closely match your preferred day and time*
*dependent on time-zone differences.